Current jobs are changing as we speak. Slowly, but steadily, automation will ensure that almost everything surrounding us change, including our jobs. The rapid growth of machine learning, automation, and other technologies have brought forward the biggest change that our job market will see.

Robots are currently used to automate most of the tasks. Artificial intelligence(AI) is also the primary catalyst for the change. In short, the economy will be completely transformed, and we need to adapt according to it.

Smarter robots are here, and they are completely capable of replacing you. They don’t get tired, bored, or need any refreshment. This can be a terrifying thing to even think. However, as it is always with change, it brings more opportunities.

Artificial Intelligence and automation are the main driving force behind the changing job ecosystem. In short, we will see a radical change in our jobs. Or maybe a jobless world with universal basic income? It is always a possibility.

Do we need the change?

According to Gallup Poll, 85% of the workers don’t like their job. There are many reasons behind the higher number of people not liking their job. One such reason includes how monotonous the current jobs are.

The technologies are also pushing the job sector through a change. Few notable technologies include machine learning, artificial intelligence, 3D printing, genetics, nanotechnology, and so on. These technologies are changing how we solve problems. For example, the current technologies can be used to build a smart world consisting of smart roads and smart homes.

The numbers are also not looking promising for the current workforce. According to the “The Future of Jobs 2016” study by World Economic Forum, the disruptive labor market will take a loss of 7.1 million jobs including the ones working in administrative and office roles. The gain, however, will be more in the roles of mathematical and computer-related fields with a gain of 2 million jobs.

The same concerns were also raised by Mckinsey Global Institute analysis, where they predict that around 50% of the jobs are automatable.

Economies will have a role to play

All of these will leads jobs to change. However, the change will impact different economies differently. According to Mckinsey, middle job workers can grow in emerging economies, whereas it can see a decline in the advanced economy where most of the work is done using automation. In advanced economies, more skilled jobs such as healthcare providers will go through a high demand.

Western countries such as the USA will move towards much faster than other countries. They are an advanced economy, and it is up to their leaders to transform their workers and make them ready for the change.

India’s story is quite different when it comes to automation. India is an emerging economy. However, a lot of jobs will be cut in 2018. According to the Venkatesh Ganesh, the expected loss of IT jobs will be around 70%, compared to just 65% global job cut due to automation. The other employment jobs, on the other hand, will see growth. According to Mckinsey, Managers, and executive will be 75% more in demand. Other professionals such as creatives, technology professionals, teachers, builders, care providers, etc. will also see a rise in demand. 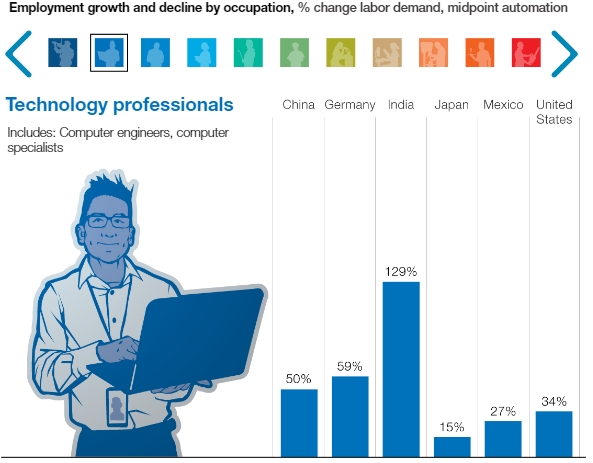 The jobs of the future will demand more skills than usual. This will impact the workplace structures. Right now, there is a corporate ladder for everyone to climb. Employees work in a competitive environment and the one who performs the best moves on to the higher position.

With more skills in demand, the traditional ladder model will eventually be replaced by “New Lattice Model.” The model will be more open when it comes to communicating with your peers and also regarding the work that the employees will do. The Guardian covered the topic in detail, also citing, that “Individuals will have the freedom to pitch to the CEO without going through layers of management.”

They also pointed out on how career path will be more fluid compared to a linear path that we believed is the only path. Also, the current combination of diverse skill set and technological advancement will open up more collaboration and innovation.

What types of future jobs will be the norm? Augmented Workforce

So, where does all of these lead us? Our workforce will be augmented and tightly integrated with technology. The way we are improving will also lead to exciting new jobs. Despite the contrary belief, we will have more jobs. Let’s explore.

Global Future Farmers: Future farmers will be technologically adept and will use them to make food. They will use drones and satellites. This will give the ability to scan for better seeds. Vertical farms will also become a norm compared to the traditional expansive firms.

Man Machine Manager: The need to manage robots of the future will give rise to the Man-Machine Manager. Have you ever wondered who will manage those machines and may interact with them when needed? Man Machine Manager will also take care of the tools that are needed to fix robots(both hardware and software.) They will also decide on the rules using which the man and machine should collaborate for doing a task.

Personal Data Brokers: Data is ubiquitous. And, this is where Personal Data Brokers will come in. Every day we generate a lot of data, and that can be used for commercial use. The company who buy your data will have to pay you if they want to use it. This will open a new job profile, Personal Data Brokers. The job is to manage the data surrounding individuals and corporations and let them understand the value of their data, generating income flow.

A.I Assisted Healthcare Technician: Medical care will now be assisted by artificial intelligence. The A.I assisted healthcare technician will be able to find the cause of disease and quickly solve problems. They will also be able to help people who don’t have the means to take healthcare.

How the future of jobs will impact our surrounding?

If jobs change in future, we will see an overall impact on our economy and how we carry out different sectors.

Industries, for example, will see the most impact. Most of the work will be automated, leaving the jobs in management and others that require a human touch. Another significant impact will be on the infrastructure and buildings. The way they are built and maintained will be changed completely, thanks to automation and robots.

Wages will also take an impact. Right now, there is a huge demand for workers who can work on low-skill jobs and do monotonous work. But, with the change, these jobs will slowly disappear. Countries like India will be most impacted by these change, where the job demand is always high and more and more people are coming out of colleges with advanced degrees.

In short, income will slowly see polarization. Emerging countries, on the other hand, will see a slow change where there will still be demand for low-skilled people for quite some time.

When until the change start to happen?

According to many reports, we would b able to see changes by 2030. By 2050, automation will have its maximum impact, changing jobs completely.

Until then, we can only prepare for the change.

To do so, the government and big organizations also need to work together to bring new reforms to ensure that man and machine can work together and share a co-working space. The importance of machines cannot be ignored at any cost.

On a personal level, we can start learning new skills. Re-skilling yourself will ensure that you can work in an ecosystem where machines play a significant role. It is essential to understand that machines are not here to replace, but to empower us. Only then, we can reach our true potential.

Do you think that our jobs will evolve faster ? Comment below and let us know.

The Future of Technology is Here

Leadership in the age of AI

India, the Next hub of Innovations